This archive of projects shows us restoring, cleaning and overhauling pipe organs

Restoration of an 1911 Harrison

A project, recently completed, involved major restoration of the 1911 three-manual Harrison and Harrison in the re-ordered church of St Chad, Far Headingley, Leeds, including the console, left. David Wood was invited to address the congregation at the service of rededication.

Painstaking work on a 'spectacular' Casson 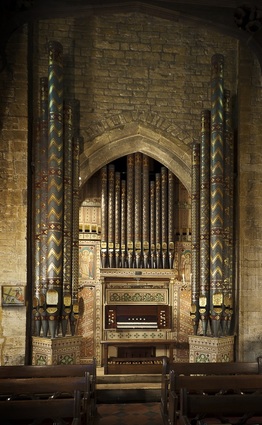 Paul Hale, organist of Southwell Minster and consultant to the scheme, wrote in Organists' Review: "To enter All Saints’ and then look west is to behold a quite remarkable sight – much the most spectacular nineteenth century organ in any village church the length and breadth of the land. Standing there, replete with 16ft pedal towers, all gloriously painted with lavish biblical references and images of saints and angels, is an organ by Thomas Casson, installed during the 1880s and restored by Wood to full working order after many years of damply mouldering away.

"Wood took the organ apart in 2010 down to the smallest piece ... and painstakingly restored it to a fully functioning instrument, working out as they did so the function of numerous tubes and pieces of mechanism which had been disconnected over the decades. The glorious painted pipes and casework have been conserved by Jenny Duffy." 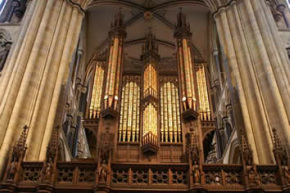 The first organ at Beverley Minster was built by Snetzler in 1767 and many of the original pipes are incorporated in the present instrument which has undergone many changes. At its opening in 1769, music by Handel was performed.

The most recent refurbishment, by our firm, was dedicated in 1995. There are nearly 4,000 pipes, four manuals and 72 stops providing combinations of sound that suit a large repertoire. 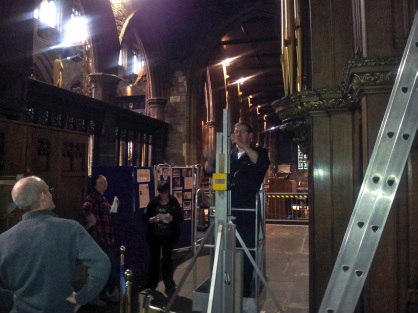 The fine five-manual organ at Wakefield Cathedral is in the care of Wood Pipe Organ Builders. The present organ was constructed in three stages: 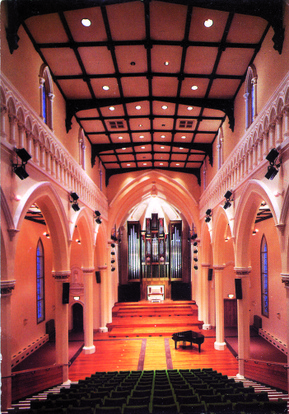 The three-manual, mechanical-action instrument in St Paul's Hall, University of Huddersfield, marked an important milestone for our firm and has drawn some of the world's most distinguished players, among them Dame Gillian Weir, Piet Kee, Jacques van Oortmerssen and David Briggs.

It is used for the teaching of undergraduate and postgraduate students and is on the roster of organs used by the Royal College of Organists for its diploma examinations.

The organ was designed in association with Keith Jarvis, a former university organist. He said: "The instrument holds a special place in the organ world of Great Britain and has considerable international recognition.

"It is a credit to the builders, Wood of Huddersfield. Philip and David Wood are in the top league of British organ builders and I would like to thank them for their dedicated work over the years."

From one home to another 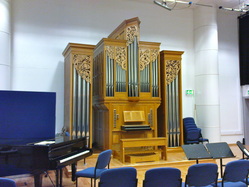 When a generous benefactor, Michael Phipps, donated his two-manual Walker house organ to the University of Huddersfield, our firm was entrusted with its dismantling and re-erection.  The 26-stop instrument, left, now stands in the concert hall which bears his name.

Mr Phipps and members of our team were at the opening concert in 2009 given by David Titterington, professor of organ at the Royal Academy of Music. A selection of pictures showing the various stages of its rebuilding may be found in the gallery section of this website.

Comprehensive rebuilding of a three-manual Hill 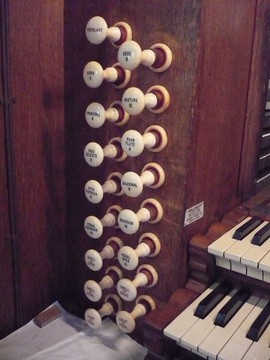 When the 1887 three-manual Hill in St Luke's, Brierfield, Lancashire, needed a comprehensive restoration in 2006, the church authorities turned to our firm. The instrument, when we arrived, was pretty much as it had been over 100 years before.

The only previous working adjustment dated from 1963 when the mechanical key action to the swell was replaced by a pneumatic action. With this exception, the organ remains faithful to the 1888 scheme and is listed as Grade II with the British Institute of Organ Studies.

As part of the restoration, all of the pipework was cleaned and the speech reset. The soundboards required full bench treatment and pallets were re-covered in felt and sheepskin. The large double-rise bellows were re-leathered in the traditional manner and pedal, key and stop actions were re-bushed. The project was completed in November 2007. 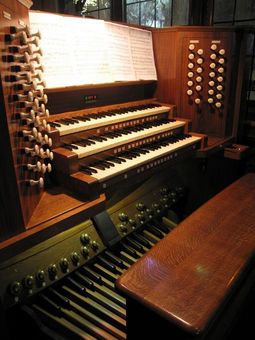 The refurbished organ in St Peter and St Paul, Mansfield
In 1970, St Peter and St Paul, Mansfield, acquired the 19th century Gray and Davidson organ from Clare College, Cambridge. It had been rebuilt by Harrison in 1911 with three manuals but by 1998 an overhaul was needed. The action was noisy and slow, one stop on the choir had been inoperable for some years and several others on great and swell were unreliable. In 1999, the PCC  invited several organ builders to put forward schemes for its refurbishment. In early 2000, our company was awarded the contract. The brief: 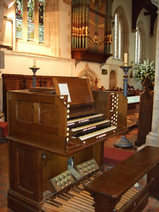 The church of St Mary the Virgin, Buckland, near Oxford, possesses a magnificent organ, built with two manuals by G M Holdich in 1890. Six years later, Charles Martin, who was active around Oxford, rebuilt it, adding a choir division. Today the configuration is the same, with three manuals and 30 stops.

In 1999, following a community fund-raising exercise, Wood Pipe Organ Builders rebuilt the organ. The troublesome tubular pneumatics were removed and replaced by electro-pneumatic actions. The console was relocated under the tower crossing, and now includes a micro-processor based combination system. The choir division was relocated on top of the swell. 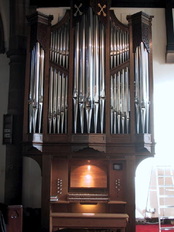 The tracker-action organ, right, was built by Wood for St Peter's Chorley in 2001, as the church celebrated its 150th anniversary. The wooden stopped diapason on the great came from the original Jardine of Manchester instrument. Further pictures of this instrument may be seen the gallery section of this site.

The first organ in Grantham Parish Church dated from 1736, had three manuals and was on a screen in the centre. It was rebuilt in the mid-19th century and relocated to the north aisle. Another rebuild followed in 1906 when it was enlarged and the fine casework by Walter Tapper provided. In 1971 new keyboard actions were fitted and the choir organ replaced with a positive section. By the early 1990s, however, a major refurbishment was necessary and a fourth manual fitted. Wood of Huddersfield carried out the work, adding a new choir division. The 1971 positive was made part of the solo organ. 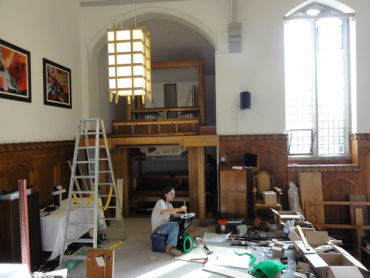 The authorities at Truro School were delighted after taking delivery of a new organ for the school chapel. The instrument was purchased from Jesus College, Cambridge, and installed by Wood.

Martin Palmer, the Head of Music, said the school would never have been able to have afforded such an instrument new. "We're really excited by this instrument. It was built in the 1970s and it's a very bright, sparkly, neo-classical instrument, with very exciting sounds."


Please see the gallery page on this site for more pictures of the rebuilding of this instrument.

Putting the Binns in at Southwell Minster 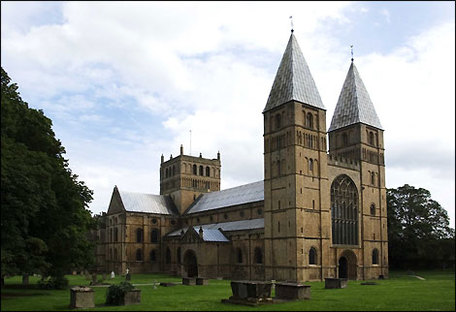 Southwell Minster, Nottinghamshire
When Southwell Minster was planning to install a nave organ, the decision was taken to combine good housekeeping with conservation by re-using a large amount of worthy material.

It proved possible to re-use the better part of two organs by J J Binns of Leeds. The first had stood in the Upper Independent Chapel, Heckmondwike, since 1904, the other was built in 1924 for Waterbarn Baptist Church, Stacksteads, Lancashire.

​They were combined with a new three-manual console and a small amount of new pipework by Wood Pipe Organ Builders. We also carried out complete mechanical restoration and updating.

Paul Hale, director of music at Southwell, writes: "Binns organs are always forthright, colourful affairs, most advantageous here, since the big Norman nave at Southwell easily absorbs a lot of organ tone. The new nave organ occupies the first four bays of the south triforium and is only visible from the nave floor if one is deliberately looking for it. A 16' octave of open wood pipes has been re-used from the Bishop organ of 1889 and the magnificent Hill, Norman & Beard Tuba of 1933 (speaking on a pressure of no less than 16") completes the picture. The organ was taken into use at Easter 1992. With its exciting sound and mobile console this instrument has proved superb both for Nave services and organ recitals." 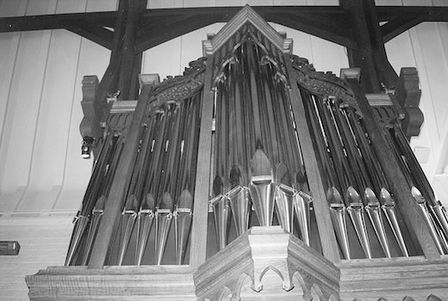 David Wood writes: In January 1997 we were approached by Nick Danby of the Royal College of Music for our thoughts on providing a new organ for the chapel of Forest School, Walthamstow, London.

Tragically this was to be his last project as he died in July of that year. The scheme was passed to Ian Bell, formerly of N P Mander, and a contract signed to provide a new 12-stop instrument.

The site was not easy as the organ had to project through an archway without intruding on the limited seating area in front. It could not go back far through the arch where the only window of any merit – by William Morris – could not be obscured.

​David Graebe architect, who had designed the casework in St Paul's, Huddersfield University for us, produced the casework design. The school was immediately taken with it and we started work. We had the chance to use computer-aided design for the first time and results were good.  The casework was typical of the high quality that Derek Monkhouse and Richard Burrows consistently achieved. 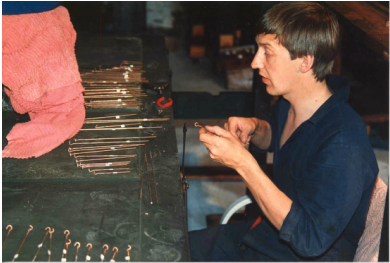 A youthful David Wood works on the French Conacher.
A client's dream of having a pipe organ of his own was realised after he moved to France. He'd heard about a 1921 Conacher in a redundant church at Hebden Bridge, near Halifax, which was to be auctioned. The instrument was to prove ideal for the barn adjoining his house near Limoges.

Philip Wood, who had known the organ for nearly 40 years, attended the sale in 1987 and the team at Wood Pipe Organ Builders was tasked with its transport and rebuilding. The process took two weeks in the summer of 1988 and the opening concert was given by Pierre Cogen, then organist of Sainte-Clotilde, Paris.