These pictures of our work include new pipe organs in Manchester and Chorley; the cleaning and restoration of the 1973 Rieger in Clifton Cathedral, Bristol; the transfer of an instrument from Cambridge University to Truro School and work completed in Leeds. 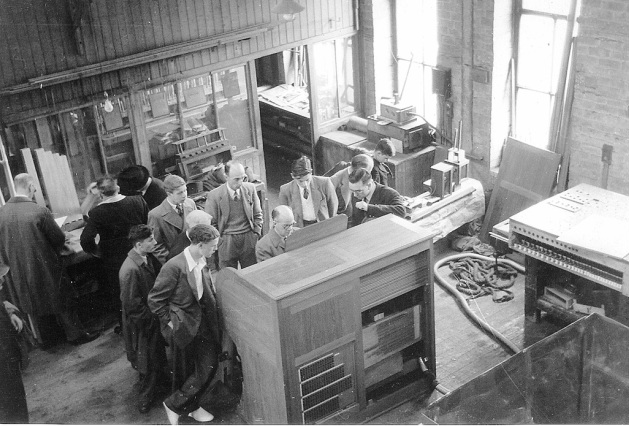 This 1952 picture was taken in the workshop of Peter Conacher, the organ builder where Philip Wood began his career and which he later managed.
The instrument was destined for St Saviour's, Claremont, Cape Town, South Africa, where it still stands in its teak case.
Standing by the console - left, in the raincoat - is Malcolm Cruise, organist of All Hallows', Almondbury, former organ adviser to the Wakefield Diocese and a one-time Conacher apprentice.
Demonstrating the organ is his former teacher, the late Alfred Frost, FRCO, then organist of the Huddersfield Mission, and a musician of renown. The young man in white shoes to Malcolm's right is Alfred's son, Brian.

Fresh pipes for the organ at All Hallows'

Continuing the story above, Wood of Huddersfield rebuilt the Abbott and Smith organ at Almondbury in the early 1970s, with a new detached console and extensive new pipework.

Further modifications were made a few years later when the console was turned through 90 degrees and the great and choir organs re-located. The opportunity was taken to add a 16ft ophicleide to the pedal division.

The widely-admired oak screen, below the projecting choir soundboard, was carved by Richard Burrows, a former employee of the firm. Standing on the far right of the picture is the Kirklees Borough Organist, Dr Gordon Stewart.