NEWS FROM OUR WORKSHOP

1. ​Leather is glued around the sides and front of the motors and left to dry. They are then ‘tailed’ by trimming excess leather and closing the hinged part. 2. The front is clamped so the motor will work freely when dry. 3. Traditional tools used in the process. 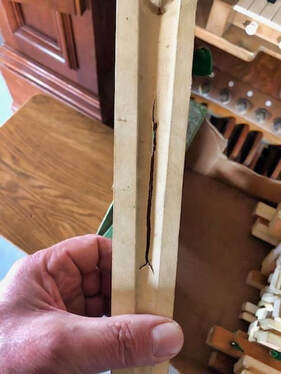 Any concert hall instrument needs regular maintenance, especially if was built in 1860.

The Grand Organ in Huddersfield Town Hall is one of the finest concert organs in Britain and is lovingly cared for by David Wood and his team.

All the pneumatic parts are worked by small leather 'purses' which inflate and exhaust every time a certain note is played. After time the leather can perish – and the first the player knows of it, the note just doesn’t play.

Over the summer Wood Pipe Organ Builders are replacing the old leather on the actions for three of the manual divisions. Pictured here are the 'purses' of the Swell division, all the perished leather having been removed and replaced.

As with so much organ building, there is little mechanisation: every stage of the replacement – removal of perished leather, cleaning off the old glue, cutting out the new leather and gluing it into place – is done by hand and with great patience.

As one organ builder said: "These parts are buried deep in the organ where no one can see them. I need to know that no one will ever have to look at them again in my lifetime”

​Thank God that such craftsmen and women still exist. 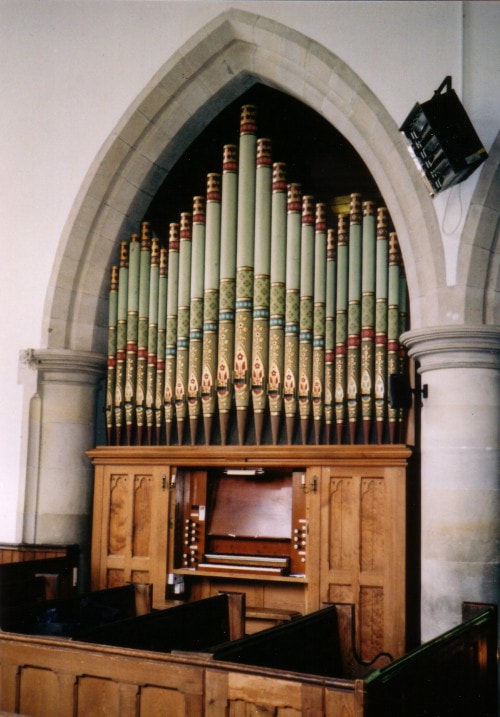 The organ before its removal from Borthwick Church

A two-manual Forster and Andrews organ from a Scottish parish is enjoying a new lease of life in a Roman Catholic church in Yorkshire.

We were invited to remove the instrument from the redundant Borthwick Church in Midlothian and install it in the church of St Anthony of Padua in Beeston, Leeds.

The organ, unaltered since it was built in 1893, is a fine example of the Hull organ builder's craft. 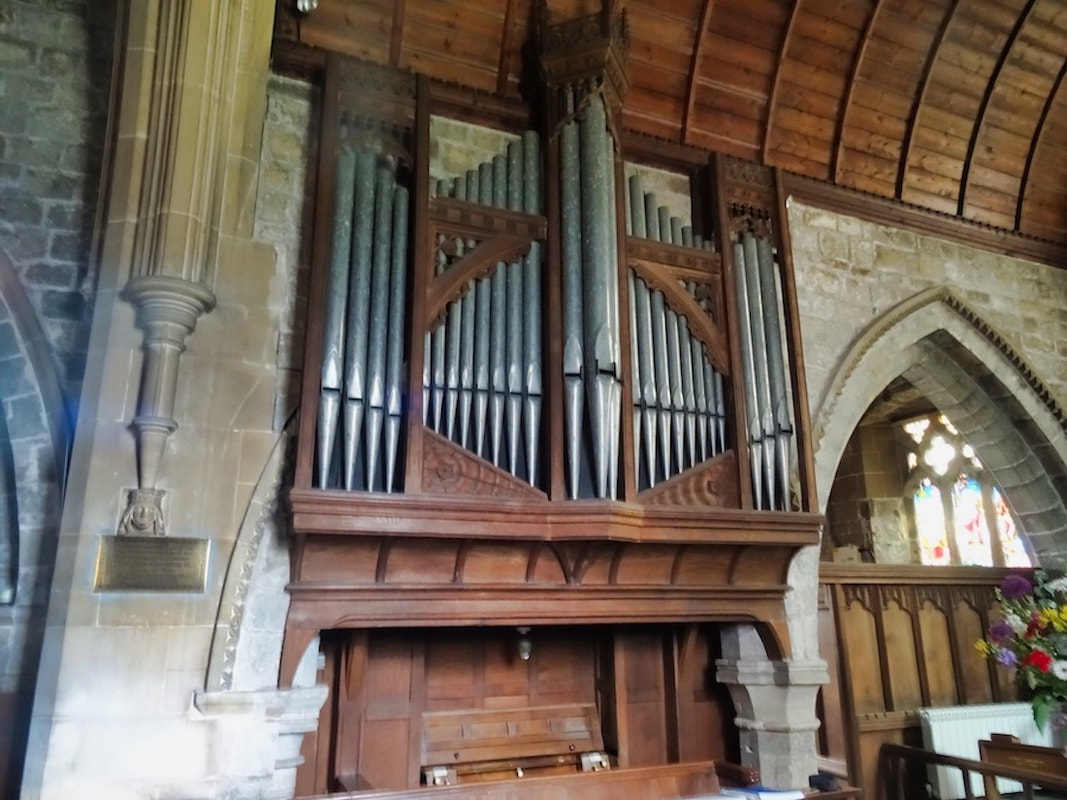 Silence is golden after drawstop alterations on the Walker in St Olave's, York

Behold the C itself: The original Father Willis Grand Open Bass pedal chest and        its 32 pipes are returned by our team to the organ in Huddersfield Town Hall

The windchest of the 16ft Grand Open Bass pedal stop on the Huddersfield Town Hall organ dates back to Father Willis and was not restored in the 1980 rebuild. Over the summer, members of our team removed the huge pipes and took the chest to our workshop, top left, for restoration.

This week it began its stately return to the town hall. An enlarged team then faced the challenge of lifting the 32 heavy wooden pipes back into the organ chamber. The task was completed successfully and the refurbished stop is impressive in its tone and power.

It will be heard in new ﻿﻿series﻿ of concerts﻿ by Kirklees Borough Organist, Gordon Stewart, starting on September 18 at 1pm.

How our dogged organ builder tracked down the hound of music 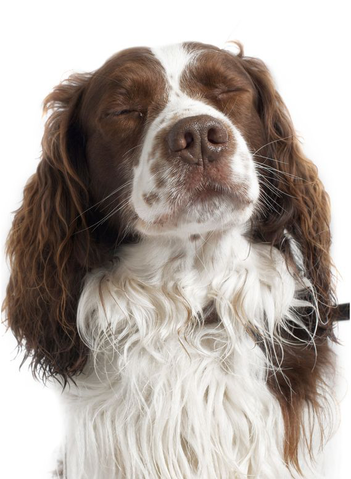 The hall had been combed by security staff. Soon the Royal visitor would arrive on stage to bestow degrees upon new graduates.

All was set for a grand occasion, except that the university organ, which was due to provide music for the ceremony, had gone to the dogs.

The mechanical-action instrument had been freshly tuned but, to the horror of the university organist, most of the Great division was producing no sound.

Organ builder David Wood went to investigate – and what he saw gave him paws for thought. Many of the Great trackers had been snapped and twisted, as if something had jumped on them.

His first thought was that a Royal security guard had let a sniffer dog into the instrument despite a specific request to leave it untouched.

Had a woofgang been at work? Was this why the organ was mysteriously incapable of playing Howells or Bach? It seemed a likely lead in his investigation – but a security official quickly dismissed the idea.

So during breaks in the degree ceremony, David set to work repairing as many of the trackers as time allowed. When the event was over, however, the truth was finally admitted. A Springer Spaniel had been let into the instrument.

​‘I've encountered some strange situations, but this one was simply barking,” said David. 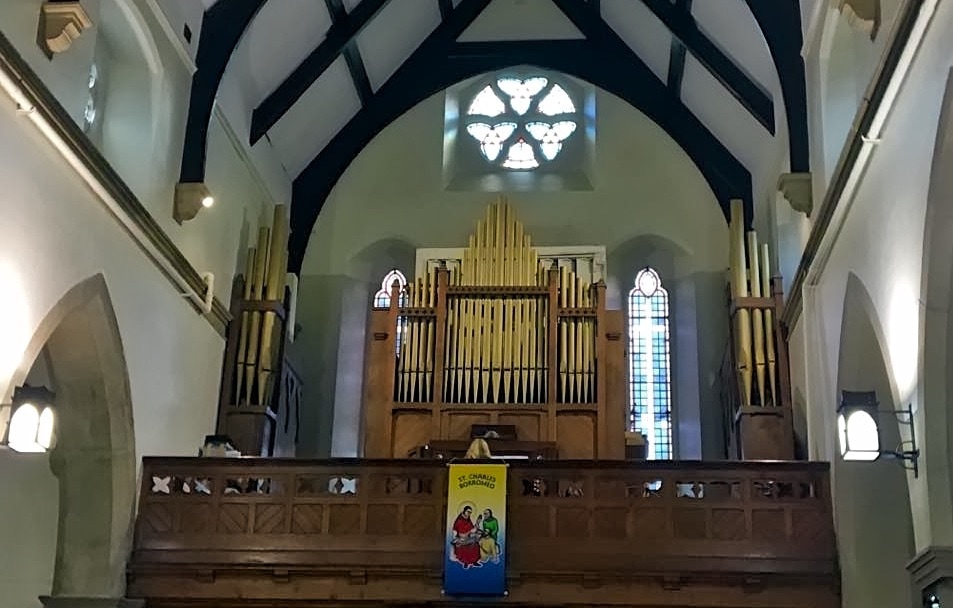 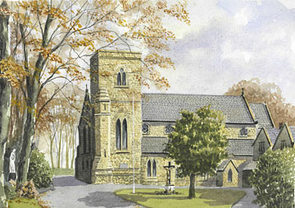 Our team is looking forward to restoring the two-manual organ, above, in the Roman Catholic church of St Charles Borremeo, Hadfield, Derbyshire.

Built in 1862 by the Manchester firm of Wheildon and Roberts, the instrument was rebuilt in 1936 with tubular pneumatic action by Norman and Beard who incorporated some of the original pipe work.

Our work will include restoring the action and the addition of a mixture to the great and a 16' reed to the pedal division.

Complex gilt: The 'lost' carving by Leonard Snetzler, restored and regilded, right, takes pride of place on top of the organ in Fulneck Moravian Church, Pudsey, West Yorkshire. The broken carving, pieced together by our team, below. 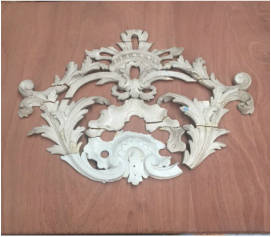 ​A lost 18th century carving which once decorated the case of a church organ in the north of England has been rediscovered by Wood Pipe Organ Builders.

The instrument in Fulneck Moravian Church, Pudsey, West Yorkshire, was built and installed in 1748 by the Swiss-born John Snetzler. It is thought the carving was by his brother, Leonard, a renowned wood-carver and plasterer.

The rococo design was found in small pieces in a cardboard box on top of the swell box by Michael Leadbeater as members of our team were overhauling the instrument.

Shortly before the find, a church member had produced an old photograph which showed the carving on a panel on the centre tower of the organ.

David Wood, managing director, said: “Michael said he’d found a box full of bits at the top of the organ. As soon as I saw it, I realised this was the lost carving shown on the black and white picture. It was a remarkable coincidence.”

He believes the carving may have been inadvertently smashed when the organ was rebuilt by JJ Binns in 1929 and that the culprit hid the evidence. The carving, which was covered in white paint, is now being restored in our Huddersfield workshop by Brian Brooman who discovered it was originally finished in gold leaf.

David said: “The people at Fulneck are thrilled at having their carving back. We shall restore it to its original position when our work on the organ is completed." We are delighted that our work on this important organ was recognised today with a feature in the Yorkshire Post, the region's national newspaper.

Renovating an instrument that incorporates work by Snetzler and Binns

Restoration of Binns organ and its autographed hand-blowing apparatus 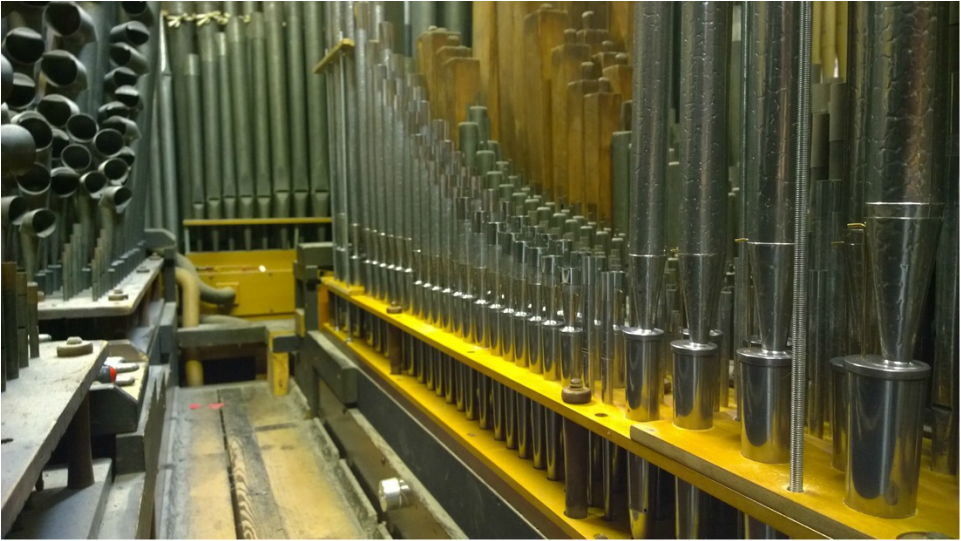 Five new ranks of pipes have been added to the organ of Beverley Minster by Wood Pipe Organ Builders. The first instrument in the Minster was built by Snetzler in 1767 and many of the original pipes still exist. The new stops are: a Bombarde 16' and a four-rank Furniture on the Great; a Double Trumpet 16' on the Swell; a Cremona 8'' on the Choir; and a Mixture of four ranks on the Pedal. All of the new pipes were made by Terry Shires of Leeds .
Specification of the Beverley Minster Organ, November 2016

Work on restoring the three-manual Cousans of Lincoln organ in St Mark's, Broomhill, Sheffield has been completed by Wood Pipe Organ Builders. The restoration included significant work to the action and some tonal revision.

Work in progress: Michael, Paul and Ed reassemble the organ in George Street Chapel, Oldham following its restoration.
﻿An 1835 organ has been returned to George Street Chapel, Oldham, after specialist restoration in our workshops.
The Georgian Chapel was refurbished during our work on the two-manual instrument, which had been unplayable for some time. It now speaks clearly into the building.

Work begins on bringing back to life a 19th century rarity

A 19th century building and its organ are being given a fresh lease of life thanks to a grant from the Heritage Lottery Fund. The charity Age UK is restoring George Street, Chapel, Oldham, for use by the community.  It was built in 1815 and is important as one of the first described as ‘Independent Methodist’. The chapel closed in 1990 and was eventually bought by Age UK.

Wood Pipe Organ Builders has been entrusted with the restoration of the 1830s two-manual, mechanical action organ which was in a parlous state. Work has begun on dismantling it and taking it to our works for investigation and overhaul. Work should be completed by the end of this year. It is not established who it was made for or where it was first used, but researchers at the chapel believe it was relocated there about 1874.

Inside the Bridgewater Hall organ

There was a rare chance for members of the public to glimpse inside the Marcussen Organ at the Bridgewater Hall, Manchester, on October 2 at 2.30pm. David Wood, managing director of Wood Pipe Organ Builders, which looks after the instrument, guided visitors on a tour inside. www.bridgewater-hall.co.uk 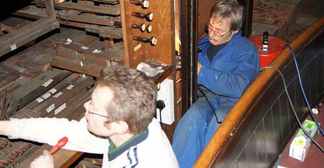 xxThe organ in Westgate Chapel, Wakefield, has been restored by Wood Pipe Organ Builders. A recital by Jonathan Bielby, organist emeritus of Wakefield Cathedral, marked the end of a 20-year campaign to have it refurbished. The chapel stands next to the railway station and the accumulated filth from passing trains had made the instrument unplayable. David Wood says: "It was the dirtiest we've ever had to deal with."

The two-manual mechanical action organ, by Francis Booth of Wakefield, was installed in the gallery in 1847. Its construction came early in his career and when it was dismantled some of the work was found to be crude. Fresh, knotty wood had been used and the soundboards were held together with clout nails and glue.  The work was financed by the Pilgrim Trust, Yorkshire Historic Churches Trust and the Chapel Trustees with smaller grants from Yorkshire Unitarian Union and Wakefield Council.

The glorious 1829 Renn and Boston organ in St Philip's, Salford, is in the care of our firm.

Restored in 1963 by Mander, it is  widely regarded as the finest surviving example of Renn's work. Especially noteworthy on the two-manual instrument are the flutes and reeds.

Concert organist Jonathan Scott, who regularly gives recitals at St Philip's, explains its unique appeal in a video made in the church.

'Clarity and quality of restoration' 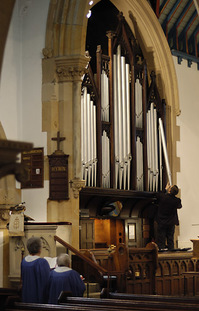 The service began with a procession led by managing director David Wood who replaced the final pipe to signify the end of the work.

A fanfare written by Noel Rawsthorne followed. This was the moment that many had been waiting for and they were not disappointed.

​A member of the congregation said: 'The clarity and quality of the newly restored instrument were obvious for all to hear.'

Dazzling: Recitalist Thomas Moore
Sixty-two organists and organ enthusiasts met in Huddersfield for a day of events to celebrate the organ. It began with a dazzling recital by Thomas Moore, director of music at Wakefield Cathedral, on the 1860 Father Willis organ in the town hall.

Afterwards came a demonstration on pipe making and voicing by Leeds pipe-maker Terry Shires and David Wood. In a fascinating session, an pipe was created from scratch and passed around the audience at the various stages in its production, accompanied by an entertaining commentary from Terry with asides from David.
Please contact us today for your Pipe organ requirements